Diamonds have been cut perfectly to reflect light for the past 100 years with the invention of the brilliant cut by Marcel Tolkowski. Each facet angled to reflect light in, across and back out of each diamond. This is called brilliance and scintillation perfectly reflecting light throughout the diamond.

40 years ago the princess cut was created by Bez Ambar to reflect light in the same manner as the brilliant cut but in a square shape to allow for seamless setting for his jewellery designs.

Until now all diamond cuts have worked on the same principle with each cut working on its own creating flash, sparkle and brilliance. This was all well until the invention of LED lighting, being a flat light unlike incandescent or dichroic lights of the past.

While creating the princess cut Bez Ambar was astounded by the colourful light reflected when starting to cut the princess cut. Being fully absorbed and too busy with his new princess cut he shelved this revelation for the future.

Dispersion of light or prismatic fire is a new feature previous diamond cuts have never before achieved. The Blaze diamond works like no other cut. Using the dispersion of light each diamond works together creating unbroken prismatic fire. Not only do they work together they also work with any other cut of diamond or gem forcing prismatic fire up into the pavilion and girdle facets. This, in turn, removes the black reflection from scintillation making the centre diamond or gem incredibly brighter, especially in oval, pear, princess and trillion cuts which often suffer from black tie or dark sections in the diamond.

As Blaze disperse light rather than reflect light they sparkle bright even in LED light, as pictured, unlike any other diamond cut.

It has taken years of perfecting and then patenting this incredible new cut for diamonds. You cannot expect other jewellers to understand or explain this phenomenon as Blaze is only available from exclusive stockists throughout the world.

View our ‘FLARE’ collection of engagement rings in store. 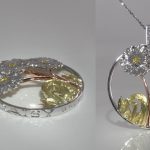 THE MARK THAT PACKS A PUNCHLatest News 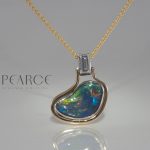